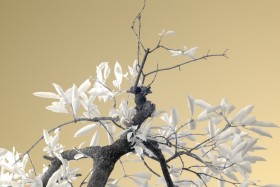 I was once intrigued by the title of a book, The Quiet Therapies. It led me to wonder who the quietest therapist I had ever known was. The answer was obvious. He was not a psychiatrist, nor a psychologist, nor even a doctor. He was the male nurse in charge of the psychiatry wards at a hospital in which I worked many years ago. His name was Wally Brown.

I knew Wally when he was in his late fifties. He was of medium height, with completely white hair and a bald patch in the middle, which he tried to conceal by combing the long hair from the side over it. His uniform was all white, and on him it somehow looked more like what a cook would wear than a nurse. I often imagined how perfect he would be with a chef’s hat to complete the outfit. (Years later when I came to America, I realized he was almost identical to the Pillsbury doughboy.) There was something cherubic about him, with his little paunch and his ruddy, always smiling face. He seemed so clean and happy.

His office was a very small, narrow space. At about ten o’clock every morning, the four or five doctors and half-dozen or so nurses would join Wally for morning tea. And he would have everything prepared for us. There would be little toasted sandwiches—with the crusts removed—a silver service for tea, one for coffee, and one for warm milk. We would sit or stand in Wally’s homely little area and, incongruous as it may seem, surrounded as we were by charts, medication, and syringes, it somehow felt very domestic. And Wally would be clucking over us, offering more tea or sandwiches, and indulging, as was his wont, in gossip. It was all so friendly and relaxing.

We would discuss the patients and the administration. And whenever someone brought up anything that was unpleasant, Wally was always cheerful. He would say, “It’ll all pass.” He somehow had a way of soothing everything with a little gesture of his hand. You knew that Wally couldn’t do everything, but he always gave the impression that it would turn out all right, whatever it was. He was a man who generated a sense of ease and calmness and quiet. If one of the doctors was angry when he came in, Wally would simply offer him his cup of tea and one of his little quarters of toast—with, of course, the crusts cut off—and immediately the doctor would relax. The overall mood in the room was always very pleasant. It was all due to Wally and his grace and charm.

Whenever we discussed the patients, Wally always had a kind word for them. If one of them had come back drunk and caused a disturbance, Wally would laugh about it and say, “Don’t worry, he won’t do it again. He’s learned his lesson.” And he usually had. Initially I thought Wally did not know much about the patients. I thought he was too superficial, too quick to gloss over the depth of their disturbances. But I was very wrong. I grew to respect Wally’s opinion as much as I have ever respected anyone’s. He knew the patients. He just didn’t use big words when he talked about them. When Wally said a man required special watching, he did. When Wally said a patient was no longer deluded, he wasn’t. When Wally said a man was ready to go home, he was ready. Wally always knew.

Wally never seemed to do any work. It looked as though all he did was chat and arrange a few flowers. But he could sense the feelings of the whole ward in a second, and those of everyone in it, including the staff. And there was always his smile, always the lightness, but surety, of his touch.

As soon as the morning tea break was over, Wally would enjoy his little ritual. He would turn on the radio to listen to a soap opera. We would go about our work. I used to wonder how he could listen to that rubbish. One day I realized that the patients would often go into his office and listen with him. Wally wouldn’t say very much to them, but they always left looking better.

I saw that Wally’s secret was the little home that was his office, and what he did there. This was not psychotherapy; it was better. It was a quiet therapy. Time and again I would see and hear a very disturbed paranoid patient scream out in the ward and then burst into Wally’s little domain. Wally would just be sitting in his chair, perhaps listening to his soap opera, perhaps writing a few notes or reading the paper. He would turn to the patient and in his soft voice say, “Don’t worry, just sit down and relax. We’ll work something out.” And the man would sit down and relax.

There would always be a singing tone, a little lilt to Wally’s voice, such as a mother uses with a baby. Usually he would make the patient a cup of tea and a little sandwich—with the crusts cut off. I think Wally accomplished more with these and his soap opera than with anything else. And the patient, no matter how disturbed, would leave the office much less psychotic than he had been when he went in.

Later, Wally would tell me what had been wrong with the patient, and he would be so accurate and precise. His recommendations would always be right. He was the true professional, so at ease with his work that it seemed as though he was not even working. Of course it had taken years of experience, coupled with his personality, to reach that point.

Many patients who were admitted to that ward were in coma following a drug overdose. There would always be a sense of urgency and panic while they were being resuscitated. But Wally would remain absolutely calm, quietly directing the nursing activities and managing to produce immediately the equipment or injections we needed. It seemed that it was all done effortlessly. Whenever there were emergency resuscitation procedures to be carried out, it was easy to tell whether Wally was on duty or not by the degree of tension in the resuscitation room. Wally had a special therapeutic effect on all of us.

At a staff Christmas party, a young doctor had just one drink—and changed completely. He had always been a very straight-laced and tight-lipped man whom I had never heard express a feeling. He suddenly and most unexpectedly embraced a very attractive young therapist and poured out his heart to her, professing how much he loved her and how totally his day revolved around seeing her on the ward, and how he just couldn’t live without her. Not only was his behavior out of character, but also out of reason. She did not share his affection, and furthermore he was a married man with young children. It was Wally who took him aside while the young doctor cried pathetically.

Over the next few weeks I noticed that this doctor was spending more time in Wally’s office. He seemed to be listening to the soap opera, and he was having his private cup of tea and little sandwich—with the crusts cut off— with Wally. And it all seemed to pass. After a few weeks I asked Wally how the young doctor was, and with his gentle waving-away gesture he said, “Oh, Tom will be all right. It’ll sort itself out. Don’t worry. It’ll all be okay.” Then he offered me a cup of tea.

I only once saw Wally without his Pillsbury uniform, and I was amazed by the contrast. Although I knew him well, I did not expect this. He was impeccably dressed in a pinstripe suit with a brown derby hat. My memory is unclear, but I think he had a cane. It would certainly have been in character. He looked so dapper and precise as he tipped his hat to me with his big smile—just like an upper-class Englishman out to take a stroll in the park. I realized then that I knew nothing about Wally except what he did, or really what he did not do, in the ward. I suspected that he was not married. He may have been deeply religious. It was not really important. Wally was a unique man in that hospital, where he created a climate of peace, love, security, and tenderness. He was to all of us the quiet therapist.