“Our Task in Life: to Transmute Kali” 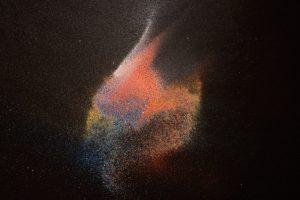 Kali: the Hindu black goddess; she of the black, horrible tongue. She wears a belt made of dismembered arms and a necklace of skulls. She wanders through cremation grounds, being the mistress of a world rushing uncontrollably toward death.

She is worshiped by devotees as Shakti, the Mother Goddess, the feminine aspect of divinity. She is revered as the force that makes all life possible and maintains the universe. She is the fundamental creative force.

Ramakrishna was a priest in a Kali temple. It was he and Ramprasad, a fellow Bengali, Her devoted poet, who most helped to transform Her image in the popular mind.

Our task in life:
to emulate Ramakrishna
and transmute
any image of our mother
as the black Kali.