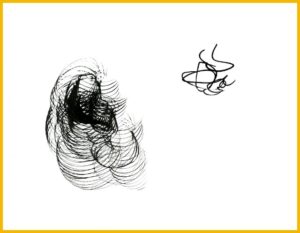 The origin of the word dada is disputed. I like Joseph T. Shipley’s: from DA, “Baby talk, imitative. The first two sounds an infant makes seem to be ma and pa, intake and output. Shortly thereafter come da, dad, daddy, the first inkling that thought’s being added to feeling. Hence da-da, the artistic movement.”

Dada, arising during World War I, was a protest “against this world of mutual destruction”[1] when “fear was in everybody’s bones.”[2]

And today, still mutual destruction, still fear in everybody’s bones. Seemingly even more so than a century ago.

We need art to allay our fears. And that was never the intention of Dada. As Hugo Ball, an early dadaist, stated, “For us, art is not an end in itself … but it is an opportunity for the true perception and criticism of the times we live in.”

It’s not perception we need – that we feel in our bones. We need art to help us to its alleviation – to find, to Know, Belovedness in “this world of mutual destruction.”

Let’s go back to the origin of the word dada – and earlier. What of art that had no thought at all – not even that which adds thoughts to feelings. Let’s go back earlier to mama – Mama art. Let’s have the art we so desperately need – coming to us not from the brain but only from the Soul – as a loving mother.

Art without thought – only Aspiration, to alleviate our deep, deep anguish.

What if museums would See that This is – and has always been – the primary Reason for all artistic endeavor?

To comfort us from fear, to bestow Belovedness. This is by far, by far, our greatest need. Not Dada – but MaMa.