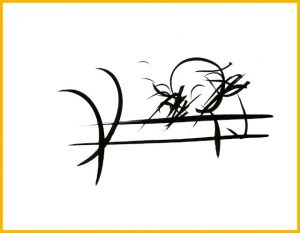 Art has lost its Purpose. For countless thousands of years it had a spiritual direction, as still it has in Tibetan tankas, in so-called primitive sand and bark paintings, in petroglyphs.

Think of the Lascaux caves – and long before them.

Why were they done? Why were they given to the people? By whom? By those who felt so impelled by the Spirit: Altruistic, Soul-enriching.

It was a devotion, it was Bhakti-Yoga. A union with their fellow beings and with the Spirit.

Look at Buddhist monks painting a sand tanka. You can feel their devotion surrendered to the Sprit for all in suffering. Egoless altruism for those whose egos impeded their finding their Souls – and to have, at last, their anguish alleviated.