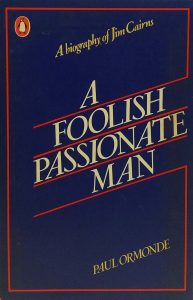 In his biography of the prominent left-wing Australian politician Jim Cairns, A Foolish, Passionate Man (Penguin, 1981), writer Paul Ormonde describes a remarkable series of interviews undertaken in 1968 by Dr. Diamond, then a psychiatrist in Melbourne, Australia,  with Dr. Cairns, who a few years later was to rise to the rank of deputy Prime Minister.. The interviews amount to what was up to that time, and perhaps since, a unique in-depth exploration of the inner psychological world of a leading politician. Their success is a testament both to the unusually honest and open nature of Cairns personality, and to Dr. Diamond’s approach as an interviewer, which is respectful, yet simultaneously highly probing of his subject. The following is selected from chapter 8 of Ormonde’s book.

“Cairns was approached by a Melbourne psychiatrist, Dr John Diamond, to take part in an unusual experiment: for Australia, at least, a politically unique one. Would Cairns, in the interests of what was called psycho-politics, submit to the probing questions of a psychiatrist about his motivations?

Diamond did not know Cairns before the interview but had followed his career. No interviewer ever had Cairns so quickly on the defensive. He seemed to put Cairns slightly off balance from the start of the interview by saying he wanted Cairns ‘to talk to me about what you’d like to talk about. I’d prefer not to lead you at all but for you to start where you would like to’. Cairns pointed out that he had always regarded an interview as a situation in which someone asked him questions, and he answered them. When Diamond persisted in his approach, Cairns haltingly began to talk about his early life on the farm, about his mother, grandparents and his police and university careers. Dia­mond’s interventions were usually aimed at revealing the emotions behind the facts.

At the end of the interview, Cairns told Diamond he felt he had learned something about himself and indicated a willingness to be questioned further. Their discussion resulted in five long interviews during the next twelve months at Diamond’s home in which the matters raised initially … were probed in greater depth, and new issues raised. The result was a riveting exchange between the two men: Cairns, still believing that the real Cairns was revealed in the ‘objective’ facts about himself; Diamond, determined to show the ’emotional man’ behind the ‘objective man’. The interest in the tapes lay not so much in what they revealed about Cairns, although that was often of considerable interest, but in the way the interchange revealed aspects of Cairns’s personality which Cairns had hitherto kept well guarded. The interviews became a voyage of self-discovery for Cairns, showing almost to his own surprise how he had systematically but unconsciously avoided emotional involvement in much of his personal and political life. He had difficulty in relating intimately to people, yet he felt the need to be closer to them.

At various points in the interviews, Cairns could barely suppress his discomfort at Diamond’s line of questioning. For instance, Cairns recalled after much mind-searching that the Clarke family of ‘Rupertswood’, Sunbury, was an early symbol to him of the injustice of inherited wealth. A pioneer member of the family had become Australia’s first hereditary baronet in the nineteenth century and his descendants had become prominent pastoralists and businessmen. Cairns as a child did not know any members of the family but, through newspaper stories and local talk, was aware of their position of economic power and social privilege. Diamond constantly referred to the Clarke family to try to draw out of Cairns his feelings about wealth and privilege, rather than allow Cairns to take his natural course and give an academic analysis of it. Cairns frequently said Diamond was making too much of the Clarkes’ significance in his life. But part of Diamond’s technique was to use the Clarkes to get the conversation out of the rational zone into the emotional zone. Cairns revealed that even in those childhood days, he believed the ‘haves’ should be deprived of some of their wealth. His view was, and remained, that people’s possession of wealth was a cause of other people’s unhappiness. The mere removal of wealth, even without redistribution, could sometimes remove unhappiness.

Diamond probed Cairns on many deeply personal issues, including impressions of the father Cairns never knew. On this issue, the interviews highlighted the contrast between Cairns, reserved and radical, and his father, by repute, shallow, flamboyant, a heavy drinker and a natural conservative. Diamond questioned Cairns on whether his radicalism could have stemmed from his losing his father; he had no inheritance ‘like the Clarkes’, and he was therefore deprived of what almost certainly would have been a life on the side of the ‘haves’. His mother would not have had to work, and his father would have ensured that he went to a private school and probably on to university. Diamond also questioned Cairns about his having no natural children of his own, and asked whether this might not explain Cairns’s attraction to young people.”

Learn more about, and listen to, Dr. Diamond’s interviews with Jim Cairns here.