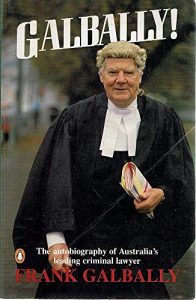 In the late 1960s and early 1970s, Dr. Diamond appeared in a number of murder trials as an expert witness for Frank Gallbally (1922-2005), one of Australia’s top defense lawyers. The collaboration between the two produced successful and original defenses, some of which made legal history. The remarkable case that began their association is described by Galbally in his autobiography Gallbally: The Autobiography of Australia’s Leading Criminal Lawyer (Penguin, 1989), from which this extract is taken.

The defendant Maria Beloni, the victim of a cruel and abusive marriage, had shot her husband in the family home near Melbourne. At Galbally’s request, Dr. Diamond examined her and, impressed with her account, the two “discussed an approach to her defense that was different from that of the other mental state cases I had represented.” Galbally continues:

“I put to Dr Diamond that her state bore similarities to the phenomenon of soldiers being ‘bomb-happy.’ I remembered instances of servicemen in the first and second world wars being continually under stress because of gun fire and shells exploding about them, if not alongside them, for months at a time. Many of them, indeed became shell-shocked and returned home in a seriously debilitated mental state. I read a good deal about shell­shock and its effects, and it seemed to me that the concept fitted well what Mrs Beloni had suffered and what she had done to rid herself of that suffering.

I asked Dr Diamond if he would consider putting my client through certain tests, commonly known in the United States as ‘truth drug tests’. He did this, tape-recording Mrs Beloni’s answers to his questions concerning her recollections of that night. I then brought Dr Diamond up to Wangaratta for the trial, keeping him hidden so as not to warn the Crown, who believed there was no defense to the murder, of my intention to call psychiatric evidence.

During the Crown’s presentation I did not dispute the fact that Mrs Beloni had shot her husband in the manner outlined. I was asked to declare the course I would be taking in relation to my client’s defense. I told His Honour that I would be calling expert evidence concerning Mrs Beloni’s mental state….

Overnight the Crown Prosecutor sent to Melbourne for the government psychiatrist who had examined Mrs Beloni in gaol when she was first arrested. The psychiatrist arrived the following morning, and the Prosecutor sat him down behind him in court. In the event, this was to give me a much-needed break.

The general rule of law is that, when a defense based upon the mental state of the accused at the time is offered, the Crown is entitled to rebut it by calling its own psychiatric evidence. Generally the Crown psychiatrist would be present in court during the hearing of the defense psychiatrist’s evidence.

That is precisely what the Prosecutor arranged. I put my medical witness, Dr Diamond, in the box that next morning and led him through his evidence-in-chief. … I was able to establish that, in Dr Diamond’s expert opinion, Mrs Beloni at the time of killing her husband was suffering from a reaction to gross stress, which deprived her of the ability to act in either a voluntary or a deliberate way.

Just after Dr Diamond had finished his evidence-in-chief, and before the Prosecution had time to cross-examine him, I asked him, ‘Could you identify the person sitting behind the Prosecutor in court?’.

It was rather a surprising question, but Dr Diamond said that he could. ‘Who is he?’, I asked. Dr Diamond duly gave the gentleman’s name. …’What’s his occupation?’, I enquired. ‘He’s a government psychiatrist’, he replied. ‘Thank you very much, Dr Diamond’, I said and sat down.

The Prosecutor then proceeded to cross-examine Dr Diamond and quickly got nowhere. Later, in my final address, I reminded the jury that a government psychiatrist was present in court but that the Crown had declined to call him to contradict our defense. This was a most valuable point.

The Judge then charged the jury as to the law. He told the members that they had to be satisfied beyond reasonable doubt that the accused’s action was voluntary, deliberate and intentional and free of anything that might have impaired those elements; and that Mrs Beloni had not acted out of reaction to gross stress, as the defense argued. Further, he advised them, it was for the prosecution to prove – since the issue had been raised – that she had not acted involuntarily. The facts of the killing itself were not in dispute. There was no question of accident or self-defense. The whole question was whether the accused was responsible, in law, for the killing. That was what the jury had to decide. The jury retired to consider their verdict and were out for some five hours. When they came back, they returned a verdict of ‘Not guilty’ of murder and ‘Not guilty’ of manslaughter.”