“Two Dentists and Their Appliances”

In 1975, Dr. George Goodheart mentioned a dentist, Dr. Willie May of Albuquerque, New Mexico who was achieving cures for many systemic diseases. I decided to study with him.

I remember him well: a wiry man, mercurial, always active. Filled with passion and enthusiasm. Utterly, utterly dedicated to his work. And always smiling.

His program lasted a week. The patients, usually about a dozen, would fly in from all over the country on the Sunday and come to his little office on Monday morning. Over the next few hours he would take wax impressions. At lunch time he made his appliances from them and then fitted them in the afternoon. The rest of the week would be spent adjusting the appliance for the patients and re-adjusting (as they continued to relax) and instructing them on how to do it themselves back at home.

I saw some incredible results – from cancer to Raynaud’s disease.

The essence of his work, Willie used to say, is that we are all robbed of our “genetic vertical and horizontal,” echoing the work of that great dentist and nutritionist Dr. Weston Price. Some of Dr. Price’s photographs of “primitive” people’s wide palatal arches, are reprinted in my book Your Body Doesn’t Lie.

Willie concentrated more on restoring the vertical height than the lateral width. He told me that this work originated with his old Texas partner Dr. William Donald Kelley (later of cancer treatment fame) who had found there were four vertical positions to which the jaw could be opened. Willie nearly always used the lowest position. This was the purpose of his unipivot acrylic lower appliance.

This is how he would find the exact height: He would have the patient sit upright in an old dental chair, just like a barber’s chair. The reason for this, he explained, is that the feet must be firmly planted for all adjusting work. (For this reason, I have long advised dentists to fit a rope or something to support the feet to their modern platformless chairs).

Then Willie would place a roll of warm wax between the molars on both sides and suggest to the patient that he just calmly relax and sink down into these two pillows. All the time Willie was observing him, very closely. “Look how those capillaries are opening.” “See his nostrils expand.” Many indicators he would see – he was so attuned.

He would make all the appliances from these little wax pillows, constantly fitting and adjusting, always observing, not just the face but the whole body, including, of course, the breathing.

On the Tuesday morning there was almost invariably an unusual phenomenon, as happened to me. The breath of all the patients would be decidedly unpleasant. And Willie would smile – they were starting to detoxify. By the Friday the smell would be gone. Without exception, all of the patients I saw there seemed considerably improved. This, of course, was very short-term. But over time I did see many long-lasting beneficial results. And they all loved Willie. His ardent desire for their health (and most of them were very ill) – and his smile.

After my first week with Willie, I flew to an ICAK conference in Arizona. I took George Goodheart aside and, using a colleague with a number of physical problems, showed him how to temporarily correct the vertical dimension by inserting a small pad of paper – like Willie’s “pillow” − to the right height on the correct side of his jaw. Instantly the subject’s Life Energy was greatly enhanced, as evidenced by appropriate muscle testing.

And this was the start of the ongoing AK work with the TMJ, and later the hyoid bone. And it was, I believe, the beginning of the continuing and ever-expanding relationship between AK and dentistry.

I gave many joint seminars with Willie. At every one, Willie would exultantly produce a little yellow pork-pie beach hat which he would perch on his head. This, he would declare, was his head size before his skull expanded after he had treated himself. And then, as a show-stopper, he would jump down from the podium and do some gymnastics including some sort-of cart-wheels to show how limber he now was. And, of course, smiling all the time.

Back in those days I used to try to make Willie’s appliance myself for my patients, usually with very good results. But I gradually gave it up – mainly of course because I am not a dentist. However I have, over the years, worked on appliances with many dentists. By far the best I have found is that made by Dr. Joseph Da Cruz in Canberra, Australia. I am honored to say that over the last ten years I have helped him to develop it to its present stage.

I have seen many remarkable results with it, even more successful than Willie’s. More so because it is more functional, and three-dimensional. We have learned a lot in the last thirty years.

Willie used to say that after the age of seven, all work would never be really successful, merely palliative. This was because he was not making major structural changes. Joseph does. Look at his photographs. As Joseph explains about his appliance:

“My dental appliance, which I call the Splint Orthodontic Myofunctional Appliance or SOMA, has a number of important benefits. It gently expands the bony structure of the upper palate without pain. This produces major improvements in facial pattern and straightens teeth while at the same time pacifying the nervous system by damping down the sympathetic overdrive. In addition, the SOMA aids orthodontic correction with great efficiency, as its design avoids the fight-back of facial muscles produced by regular appliances; and it helps lessen temporo-mandibular dysfunction by decompressing the TM joints and encouraging muscle relaxation.

The benefits produced by the SOMA are far more than just orthodontic and facial. It has helped relieve different types of chronic pain, respiratory problems, TMD, neck and spine problems, and immune system conditions. There is a hypothetical possibility that the Pituitary gland operates more normally when the cranium is widened. and the pituitary thyroid adrenal axis works better. In addition the airway space is freed, allowing improvement in swallowing, speech, eating, breathing, and sleeping.

One reason why the SOMA works so efficiently is that its design overcomes two problems endemic to standard dental appliances, whether of the fixed or removable type. The first problem is that standard appliances lock the maxilla (upper jaw) along with the teeth .If the cranial sutures are jammed they inhibit the Cranial Respiratory Impulse (CRI), the continuous pulsation in the cranium whose strength is essential for optimum health. The other problem is many standard appliances use metal across the midline, which is another major source of stress.

The SOMA has been specially designed to counteract both of these problems. It fits onto the upper teeth in a particular way so as not to inhibit CRI. And its metal forms a circle, a design which does not stress the wearer. I am grateful to Dr. Diamond for his assistance in designing an appliance which counteracts these problems.

Thus the SOMA appliance applies the precise amount of pressure in the precise directions in the precise proportions to the bony structures so as to achieve optimal dental orthopedics. While of course it takes time to bring about bony changes, one of the most interesting aspects is that as soon as the brain perceives the correct realigning pressure, there is an immediate overall reduction in stress, in sympathetic nervous system overactivity, an enhancement and balancing of the cranial respiratory impulse, an opening of the nasal passages and relief of many muscle tensions.

Let me give you an example of what the SOMA can accomplish. Mrs. S is a patient who wore braces as a teenager to improve her smile. Because her appliance did not address the underlying causes of her dental problems, malocclusion (crooked teeth) reestablished itself, along with mouth-breathing, narrowing of the palatal arches and distalizing of the jaws due to tightness in the throat. This was accompanied by a pattern of stress-related clenching and squeezing of facial muscles along with this severe migraines, and neck and back pain.

Within three months of wearing the SOMA, her lower jaw had moved forward and she was properly able to close her mouth and to breathe through the nose. Jaw position an influence cases of sleep apnea, etc. As a result her palate widened, her teeth straightened (see photos), and her pain has totally disappeared. I sometimes describe this as unfolding of the face.”

6 and 7 are plaster models of the jaws before:

Pictures 8-13 are after a year and half and stable: 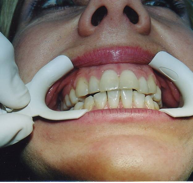 Mrs. S. now has been completely relieved of her migraines and TMJ problem and has a very beautiful smile.

Thus we can see that with his SOMA appliance, Joseph can, in a sense, take us back before we were seven, and correct the underlying structural problems that should have been corrected then. When I see Joseph working with his/our patients – and I’ve observed him many, many, times – I’m so reminded of Willie. For Joseph is also wiry, and passionate and so in tune with the total patient, always observing so closely. And like Willie, infinitely patient, dedicated – and smiling.

Ever since Willie I have carefully examined the mouth and facial structure of nearly everyone who consults me. So often what I see makes me very sad. At times I’ve almost wanted to cry. How can this poor person ever cope with life, ever be filled with Energy, ever be happy and healthy, with such compacted and distorted dental architecture! So for some years now, I examine their mouths with confidence because I have seen, time and again, how Joseph’s SOMA appliance can produce quite remarkable improvements.

I came to realize that a holistic approach must not only include the dental area but perhaps should even start there. All dentists, knowingly or not, are potential holistic practitioners – and Dr. Joseph DaCruz is the certainly one of the best!