A talk by John Diamond, M.D. 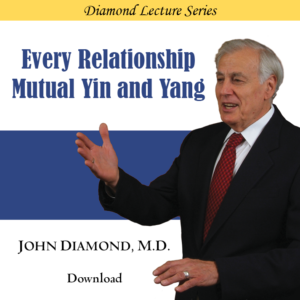 This insightful talk develops Dr. Diamond’s approach to the philosophy of relationships. In any relationship, such as that between a musician and his instrument, a photographer and his subject, or a painter and his paper, it superficially seems that one party is active (yang) and the other passive (yin). For example, the guitarist actively strikes (yang) the passive (yin) guitar string. But at a deeper level both parties are mutually yin and yang to each other: The string is beckoning the guitarist just as strongly as the guitarist the string. This is in accordance with Chinese philosophy which argues that everything is both “empty” and “full.”