New audio download released! – “Emerson and the Revelation of the Soul”

A talk by John Diamond, M.D. 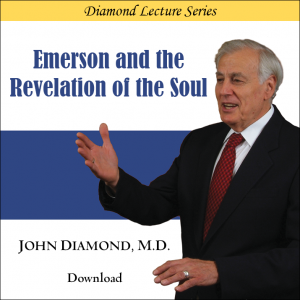 In this important talk Dr. Diamond’s develops his model of the Self. Previously the model had two elements: the Muse, the deepest part of the self, which is pure love; and the ego, which translates the Muse’s message into everyday life. To this duality he adds a third component, the Soul, drawing extensively on the work of the 19th century American Transcendentalist philosopher Ralph Waldo Emerson. He concludes that the Soul is the “vitalizing force” that activates the Muse, which “sings” its song of love to the ego, which in turn modifies and puts out that message to the world. This talk was the first time Dr. Diamond discussed the idea of the Soul in this way, and, in a modified form, it is a concept which has remained central to his work since.